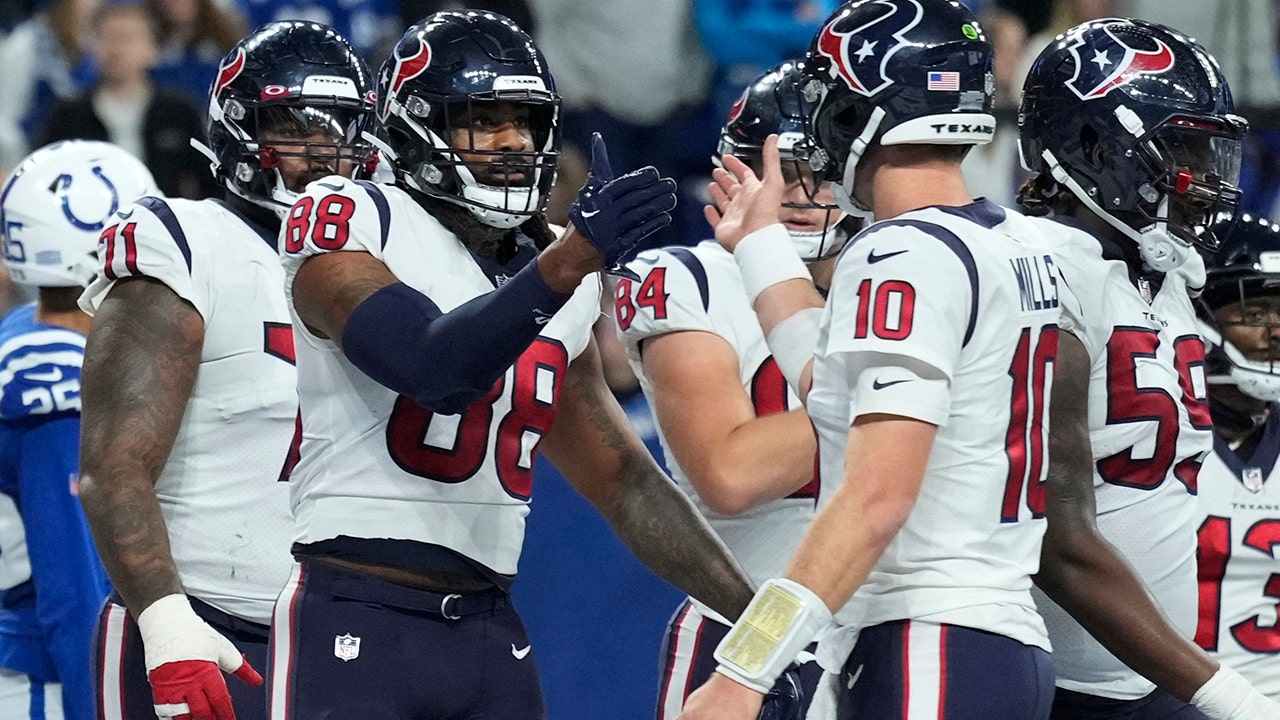 While the fight for the best teams in the NFL was mostly set before Sunday, one of the biggest uncertainties was the battle for the No. 1 pick in the 2023 draft.

The Houston Texans and the Chicago Bears entered as favorites to win the pick. A Texans win and a Bears loss would have given Chicago the first pick. Houston was ending the season against the Indianapolis Colts and the Bears had a date with the Minnesota Vikings.

Houston Texans tight end Jordan Akins (88) celebrates with quarterback Davis Mills after scoring on a 19-yard touchdown pass during the second half on January 8, 2023 in Indianapolis.
(AP Photo/Darron Cummings)

The Texans made sure to make their final game of the regular season exciting.

Texans quarterback Davis Mills threw a 28-yard touchdown pass to Jordan Akins to cut the deficit to one point with 50 seconds remaining. Houston coach Lovie Smith decided to go for the two-point conversion and Mills found Adkins again to put the Texans up 32-31.

Houston Texans tight end Jordan Akins (88) is congratulated by quarterback Davis Mills (10) after scoring a two-point conversion during the second half on January 8, 2023 in Indianapolis.
(AP Photo/AJ Mast)

Then the Houston defense stopped Colts quarterback Sam Ehlinger on his final drive and the Texans were able to walk away with the win and clinch the second overall pick in the draft. Houston won twice in the last three weeks to finish 3-13-1 on the season.

The Bears lost to the Vikings in a game that wasn’t very close. Vikings running back Alexander Mattison had two rushing touchdowns and Kirk Cousins ​​threw one to Adam Thielen.

Chicago Bears wide receiver Dante Pettis (18) is tackled by Minnesota Vikings cornerback Chandon Sullivan (39) after catching a pass during the first half of an NFL football game , on Sunday, January 8, 2023, in Chicago.
(AP Photo/Nam Y. Huh)

The loss dropped the Bears to 3-14 on the season. Chicago will have the first pick in the draft for the first time since the NFL-AFL merger.