Wind energy in Colombia: one more year of waiting for it to take off – Sectors – Economy 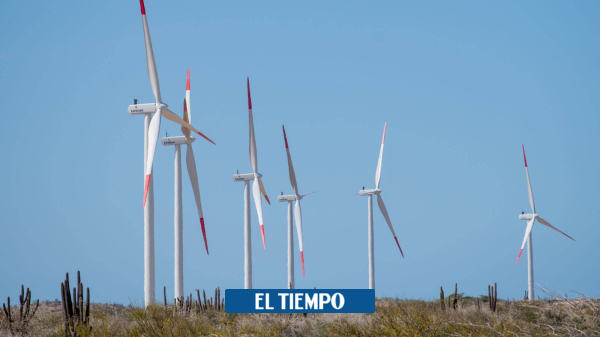 The Portuguese EDP Renovables, which for several months has been advancing the construction of the first two wind megaprojects in Colombia, received bad news that made it Alpha and Beta power generation starts one year later than planned initially: end of 2024. This is in addition to the blockades that the company has had to face by residents of the area.

Although to date Colombia already has three wind farms, these are smaller and together they have a capacity of only 51.5 megawatts, while Alpha and Beta will contribute 492 megawattswhich is equivalent to the electrical energy required to supply a medium-sized city like Pereira.

(Also read: Investigate Enel for alleged irregularities in the energy prices it offers)

They will be located in the municipalities of Maicao and Uribia, in the department of La Guajira, and will have 90 turbines in total (51 are for Beta and 39 for Alpha). Most of them have been stored in Puerto Brisa since December 2021, when they gradually began to arrive in the country.

The investment that the company is making for the construction of these two projects reaches 550 million dollars. further, is adding 1,000 jobs in its construction phase.

The next step will be to move the turbines to the land where they will be installed, once the foundations that are being built are ready. These towers are a puzzle of five sections that, when put together, add up to 125 meters highEven when one of the blades is in a vertical position, it is the same height as the Colpatria Tower in Bogotá.

So that the energy produced by these wind farms can be injected into the national grid, and thus reach Colombian homes, it is also Two transmission lines are required.. The first is a cargo from Intercolombia and is Cuestecitas-Copey-Fundación, which will be 265 kilometers long and will cross the departments of La Guajira (Albania), Cesar (El Copey) and Magdalena (Fundación).

The works are advancing in the three sections of the line and in the six yards where the new substations will be located. According to the ISA affiliate, if the sociopolitical and climatic conditions allow it, this transmission project would be coming into operation at the end of 2023.

The second line is in charge of EDP Renovables and is the one that must leave from Beta to connect with Alpha, and then reach the Cuestecitas substation of Intercolombia, in order to transport the energy they will generate.

(Also read: Get ready: these are the ones that rise 13.12% due to pocket inflation)

It is not enough to just give an answer, but it is also required that it be satisfactory

It is precisely in this line in which the Portuguese company faces problems, because after six months of study, the National Authority of Environmental Licenses (Anla) I decided to file the license applicationa permit without which construction cannot begin.

The authority found various shortcomings in the environmental impact study (EIA) that prevented it from continuing with the evaluation to define whether or not the route of the transmission line is environmentally viable.

The Anla even asked the company for additional information, which was delivered on August 12, but it was not enough to resolve the pending requirements and a «series of highly relevant findings» which prevented the proceeding from proceeding.

«It is not enough to simply give an answer, but it is also required that it be satisfactory in terms of the purpose for which it was requested, without presenting gaps and weaknesses that prevent this authority from adopting a decision regarding the environmental capacity to the project,» he said.

Among other aspects, the filing of the license is due to the fact that an identification of the environmental impacts generated in each overlapping area was not made; The totality of the road accesses that are projected to be used, nor the works and activities to be carried out in terms of adjustments, were not taken into account; and most of the roads in which the company plans to clean up vegetation control on the edges of roads and paths are outside the defined biotic area of ​​influence.

Additionally, ANLA stated that the shortcomings identified regarding the characterization of protected areas and strategic ecosystems, added to the inaccuracy in the delimitation of the area of ​​biotic influence, allowed to conclude that it is not certain if it would become detached from some other sensitive ecosystemsstrategic or protected areas.

It was also possible to establish that the towers identified with the numbers 2 and 91 are located over bodies of water found in the cartography of the Agustín Codazzi Geographic Institute. However, the company did not request the corresponding channel occupation permits.

(Also read: The automotive sector is less optimistic for 2023 due to the dollar and GDP)

However, EDP Renovables can reapply for the environmental license before ANLA, as long as it corrects all the information deficiencies that were previously found.

Once the study begins, the authority has 90 business days to provide a response in this regard, but the term can be extended by 60 calendar days if additional information is required.

Therefore, the company is»working intensively on the new environmental impact studyfollowing the detailed recommendations he gave us in Anla».

The additional delay in the construction of the connection line slowed down the works of Alpha and Beta, but the company is confident that the collaboration of the institutions allows minimizing the delay.

For this reason, he said that the support of the ANLA, the Directorate of the National Prior Consultation Authority and the ministries of Mines and Energy, Environment and Interior is «fundamental and essential to expedite and speed up the processes to file the EIA as soon as possible possible».

«With the collaboration of the institutions we will be able to minimize the delay and we should enter into operation at the end of 2024«, said EDP Renovables to EL TIEMPO.

This means that Alpha and Beta will be one more year late, since the company should start generating these projects before December 2023, since this date marks the year of grace that was given to the projects that won in the 2019 Reliability Charge auction so that will enter into operation without incurring any sanctionssince the original date was December 1, 2022.